Located among the foothills of the lush Andes Mountains, Bodega Norton boasts a magnificent heritage of over 100 years, and a mission as lofty as Andes themselves: “To be the best winery in Argentina known for the quality of its wines, professionalism and honesty of its team, while continuing to maintain its characteristic passion and excellence in wine production.”

The winery cultivates 1,730 acres (700 hectares) of vineyards and harvests grapes from almost the entire spectrum of grape varieties available in the Argentinean region. Bodega Norton vines have an average age of 30 years and many acres contain 80-year-old vines.

Each vine is under the watchful eye of Pablo Minatelli, vineyard manager at Bodega Norton. Minatelli is responsible for all aspects of grape production, from planting and cultivation to the harvest process, including the management of all workers collecting grapes. In this part of his job, he maintains a great respect for the role of human resources in achieving Norton’s potential. “Hand picking is the only way to harvest grapes properly, ensuring the best wine,” said Minatelli. “At Bodega Norton, people bring to life the winery and its wine. As we say, ‘Men’s hands contain nature, protecting and caring for her with their work.’ If you cultivate the best people, they will help you produce the best wine.”

“The earth, climate, vines and passion of our people, live in every one of our wines and their presence is felt in the pleasure of those who enjoy them.”

Norton’s 150 harvesters are paid based on the number of bins each fills. Simply put, the more bins one fills, the greater ones earnings.

However, like most wineries in the region, Bodega Norton was using a decades-old system for tracking compensation owed to each worker during the harvest season. This system consisted of thousands of aluminum or plastic chips of different colors and shapes, signifying the amount of grapes picked. A harvester would collect an appropriate chip from a supervisor each time they picked a full bin of grapes and delivered it to a collection site. The harvester would pocket the chip, then return to gather another bin full. At the end of a workweek, each harvester would present their chips to a manager, who would tally them and issue a voucher which would be exchanged for payment.

In some cases, pocketed chips were dropped and lost as harvesters moved through the rows of vines throughout the course of their workdays. As harvesters brought chips home after a day’s work, there was also the chance of the chips being misplaced or stolen. Often, the chips were used as currency between workers to settle personal debts between paydays. 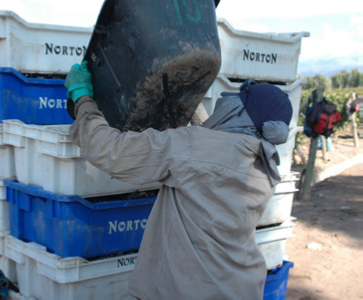 “There was always a disparity between the number of chips distributed and the number returned,” said Minatelli. “It was impossible to know where they went, and difficult to ensure each worker received proper credit for their work.”

The chip system presented other inherent administrative and logistical difficulties as well. The paper-based system required that one day each week be set aside for collecting, counting and processing the chips. On that day, harvesters were unable to earn compensation collecting grapes and the winery did not have grapes to proceed with wine production. 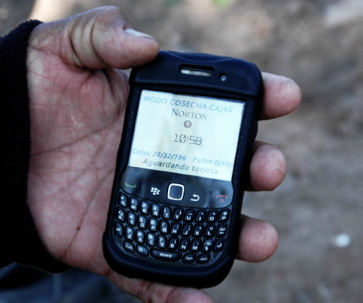 “We sat down with the people at Bodega Norton and reviewed the entire production process, from vine to bottle, to identify how HID’s RFID technology could help improve efficiency, accuracy and productivity, while still ensuring the highest quality finished product,” said Guillermo Ibarraran, sales manager, Latin America, Identification Technologies with HID Global. “Based on Norton’s philosophy that people bring life to the wine, we decided it was important to begin with the harvesters.”

First, the cumbersome, inefficient chips were eliminated. Instead, each harvester was issued an armband equipped with a contactless ISO MIFARE card that uniquely identifies each worker. These cards are resistant to moisture and fluctuating temperatures, ensuring that they withstand daily use and exposure to outdoor elements while being worn in the fields.

Fundación Ada Byron (FAB), the system integrator partnering with HID Global on the Norton project, outfitted vineyard supervisors with NFC-enabled cellular phones. Each supervisor now simply places his phone next to the harvester’s armband and then near the Epoxy Disc tag on the receiving bin he has filled. An audible tone assures both the harvester and supervisor that each collection bin has been counted and credited to the appropriate harvester.

“Incorporating NFC technology enabled cost-efficient software development and eliminated the need to invest in dedicated RFID readers — thanks to interoperable HID Global cards and tags,” said Héctor Franco, of Fundación Ada Byron. “More importantly, they allow us to incorporate Internet access and the integration of applications, such as GPS and accounting into the system.” Using NFC technology made it possible for the new system to be introduced through familiar smartphones that supervisors were already accustomed to keeping with them in the field.

The HID Global and FAB solution drastically improved Bodega Norton’s productivity, through more efficient use of resources. Norton’s 150 harvesters and their supervisors are now able to devote one additional day each week to gathering grapes. That day was previously spent unproductively collecting chips and issuing vouchers — a time and expense that added no value to the wine-making process.

For supervisors, gone is the disparity between chips issued and chips collected. They can generate balanced records of credits distributed and accurate forecasts of salary payments. In addition, they can precisely evaluate harvest yields on an individual basis, rewarding those who work most quickly and efficiently.

The harvesters appreciate the faster, easier system. They no longer fear lost or misplaced chips, reporting the new system to be more reliable and secure. As a result, they are more satisfied that they are being compensated fairly, and motivated by knowing their efforts will be properly rewarded. Further, by eliminating the day that used to be needed to for Norton supervisors to collect chips and issue vouchers, each harvester can now devote more time to earning.

Satisfied harvesters is one reason Bodega Norton was recognized in 2010 by the consulting firm Great Place to Work, as amongst the best companies to work for in Argentina — the only winery to appear in this ranking.

Harvester satisfaction yields better results for all parties involved, and according to Mr. Minatelli, “Thanks to the efficiencies of the new RFID system, we pay better than other vineyards, and that means we attract the best harvesters. With the best people, and reduced administrative time and expense, we get a better harvest and better yield.”

Bodega Norton also discovered that the new RFID and NFC driven system generates more detailed, real-time information that can be used to guide better management decisions. Replacing the error-prone paper-based system provides a clearer picture of who is working, where and when they are working, and how many bins of grapes are being harvested. 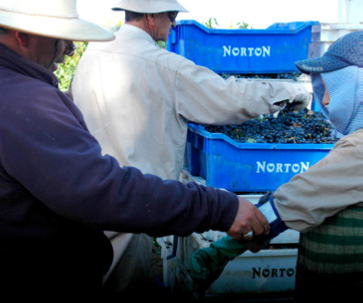 Cultivating Benefits for the Future

Bodega Norton plans to apply RFID technology and automation to improve quality, productivity and efficiency at virtually every stage of the process from grapevine to glass.

“HID Global is uniquely qualified to assist Bodega Norton as they expand their use of RFID technology,” said Richard Aufreiter, director of product marketing, Identification Technologies with HID Global. “We offer the industry’s most diverse and flexible line of interoperable RFID tags and transponders, plus proven expertise and a global network of integrator partners. Beginning with the grape harvest, HID and FAB can help Norton improve quality, optimize data accuracy and streamline critical systems at every stage of the wine production and distribution process.” 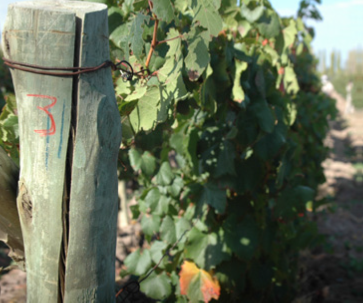 “Ultimately, the multi-tiered, RFID electronic tracking and recording system we are implementing with the help of HID Global and Fundación Ada Byron is designed to produce a singular result: The best wine for Bodega Norton customers.”

For example, Bodega Norton uses a process of precision viticulture to ensure each plant reaches maximum potential. The system maps “vineyards within vineyards” subdividing the Norton plantation into small work plots, which are each worked in a specific and individual way as to cultivate them to full potential. Norton will tag each row of its expansive vineyards to precisely identify and manage vine care, feeding and growth. In addition, tracking each grape harvest from row to bottle will enable the winemakers to trace an individual bottle to the day and time the grapes were picked and even identify the harvester who picked them. Norton can trust a number of highly durable HID Global disc shaped tags to perform reliably in this application, such as the Epoxy Disc family or IN Tag™ family of RFID tags.

There are many additional areas at Bodega Norton that have been identified for enhancement using HID’s RFID technology. Real-time access to detailed reporting enables management to reap the data needed to produce more informed decisions.

For example, pruning is a critical concern to the viticulturist as it affects grape yield and quality. Proper pruning will lower the yield but produce a higher quality grape — grapes that will have a stronger concentration of flavor which is ideal for wine making. Using RFID, wineries can track which pruner does which row and give feedback on the yield and quality year-to-year. As with the harvesters, it is best to attract the best pruners who take pride in their work. When these workers prune the same row every year the winery can provide feedback on the results for ongoing improvement of the vineyard. Other systems to be integrated via RFID and electronic recordkeeping may include:

Raw materials inventory and transportation – real-time reporting of grape varieties and volume as they move through processing.

Finished goods inventory and distribution – UHF tags can enable an entire truckload of wine to be accounted for in seconds while the truck rolls past a reader station.

According to Minatelli, “Ultimately, the multi-tiered, RFID electronic tracking and recording system we are implementing with the help of HID Global and Fundación Ada Byron is designed to produce a singular result: The best wine for Bodega Norton customers.”